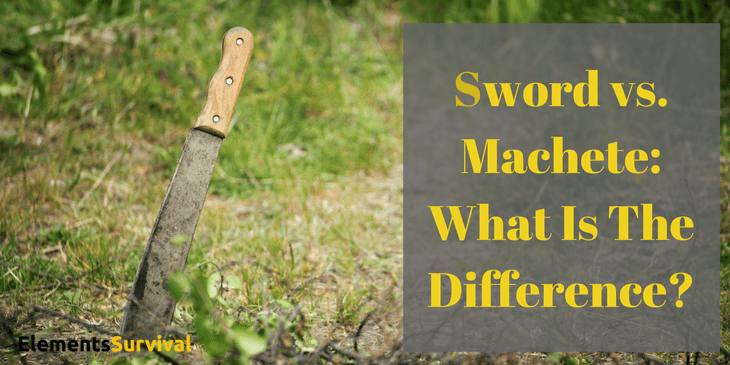 Sword vs. Machete: What Is The Difference?

In adventure films, you rarely ever see the hero lost in the wilderness hacking and slashing at underbrush with a samurai sword. Rather, they usually have a machete in hand. But aside from cutting down shrubbery, is there really a difference between the two blades? The answer: Yes. Machetes and swords have many dissimilarities in design, purpose, and fabrication.

The origin of the word “sword” is Germanic, spawning from three different Anglo-Saxon dialects. In Old English, the word was sweord; in Dutch, it is zwaard; and in German, it is Schwert. However, swords have many names depending on where the weapon is from. There are scimitars, katana, Chinese Jian or dao, Korean hwandudaedo, nodachi, the Indian khanda, zweihanders, claymores, and so much more.

Interestingly, “machete” was first used in 16th century Spanish and is derived from the word macho, meaning “hammer.” There is also some evidence that “machete” also stems from the Latin word marculus, or “small hammer.” Further, in English-speaking cultures, a “machete” is often called a “cutlass.”

As you can see, the sword as we know it has always been called a sword. Machetes, on the other hand, has roots in the Spanish word for “hammer.”

A History Lesson in Weaponry

Though the etymology gives way to some interesting perspectives, it is necessary to look into the origins and reasons behind the production of swords and machetes.

The first occurrence of a weapon that can described as a sword was in 3300 BC. They were unearthed in Arslantepe-Malatya, Turkey, a UNESCO archaeological site. For the historical buffs, Arslantepe was part of Mesopotamia, the first true human civilization. These swords were crafted from bronze, inlaid with silver, and were about 60 cm (24 in) in length. Other variants found in the Middle East were made of arsenic copper.

Around 1700 BC in Minoan Crete, the 100 cm swords of the Aegean Bronze Age were developed. You may see these referred to as “type A” bronze swords. But it was the birth of the Naue II type sword (also known as the Griffzungenschwert), originally described by Julius Naue, of the European Bronze Age that change the way European swords were made. The design lasted well beyond the Iron Age.

In other places around the world, such as the ancient Punjabi city of Harappa (3000-1500 BC), and in the Bronze Age Shang Dynasty of China (around 1700 BC), the precursor of modern day swords were widely used in war.

Mind you, that was solely the Bronze Age of humanity. Swords have been used by the Spartans, Greeks, Romans, Persians, Middle Age knights, Vikings, Celtics, samurai, and so many other ethnic groups throughout history. In the 13th century, there was a medieval weapon called the falchion, which resembled the modern-day machete. The falchion was a short sword that had a curved cutting edge and widened point. But, where the machete lacks a guard, the falchion has both a protective guard and a hilt for battle.

In ancient Greece, the kopis (an adaptation of the Ancient Egyptian khopesh) was comparable to the machete. The kopis was used for cutting meats, especially during ritual slaughters.

Since the 16th century, the machete has been a popular tool for agriculture in tropical and subtropical climates—especially in Africa, Central, and South America. Explorers once used machetes to hack through forest undergrowth or chop down sugar cane. In daily household chores, many cultures use the machete as a cleaver to downsize large foodstuffs.

We have also seen the machete as the ideal weapon for uprisings and, more unfortunately, in genocides.

The major historical difference between the sword and the machete would be that the sword was primarily used for war and self-defense rather than an agricultural tool. However, the machete, being more simplistic in design and readily available, has become a symbol of resistance.

Differences in Construction and Performance

A lot of survivalists will choose a machete as their tool for cutting through the wilderness for multiple reasons. This has to do with how swords and machetes differ in construction, price, and performance.

In the past, machetes had a much more dependable construction. However, since the 1950s, the fabrication of these tools has resulted in a crude presentation. Common metals are tempered carbon spring steel or stainless steel—though the latter is not durable and will break after a short duration. The blade usually has uniform thickness and features a full-length tang that is punched into one end of the metal. There is no primary grind, resulting in a shape that is ideal for hacking and chopping but not much else. Machetes can be mass produced. Thus, the price of a utilitarian design is roughly 20 USD.

The basic performance of a machete, that is to say the motion one must use for efficiency, is hack and chop. Because of the lack of grinding and geometry of a machete, it is not meant to slice. A machete essentially works like a long cleaver.

Regardless of where the sword is from, the manufacturing of these weapons has always been left to the specialists, commonly referred to as swordsmiths or blacksmiths. While swords can be mass produced, they are “wall-hangers,” rarely utilized for anything but decoration.

A sword worthy of battle requires a plethora of metalworking techniques, from casting the melted metal, filing, grinding, cutting, re-firing, folding the metal, and then tempering the blade for resilience. The entire process may take up to several weeks and is extremely labor intensive for the crafters. That is why a handcrafted, functional sword will often be priced around 500-2000 USD. Utilitarian models, however, will be in the 100-300 USD range.

The design of swords, even those from ancient civilizations, were fabricated in such a way that with one swing an attacking person or animal could killed. As grim as it sounds, swords were made solely for slicing through flesh and bone.

Thus the ultimate difference is that, while both are technically blades, swords are weapons and machetes are tools. Where carrying a sword of survival is frowned upon (and illegal in many countries), a machete is often utilized by farm workers and survivalists who spend extended time in the wilderness.

Have you ever had the feeling that our society and economic system may collapse at any moment? If you have, you’re not alone, because many people are preparing every day for the end of the world.