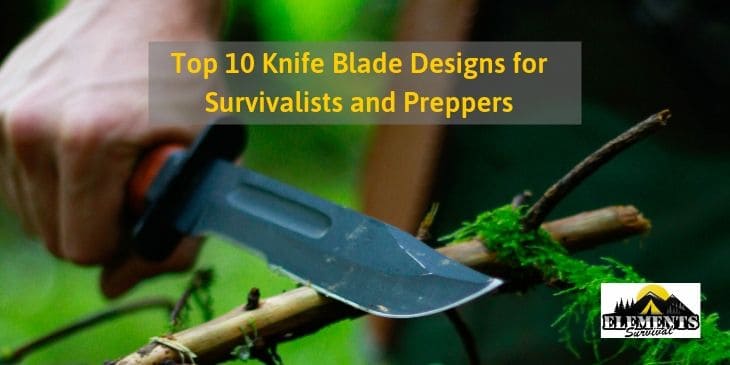 Expected and unexpected survival situations may have you searching for a fine point or stabbing tool. As a prepper, you know the importance of a fixed or folding blade knife; but do you know the various blade designs and how they impact that knife’s performance? Not all blades can cut ropes or skin an animal, so if you are looking to add a new blade to the survivalist arsenal, it is time to learn which blades to buy and which ones to leave behind. Here are the top 10 knife blade designs and what the uses are.

Also, before getting into the blade designs, here is a quick public service announcement: always opt for a full tang blade. Full tags—where the blade runs the entire length of the handle—add strength and durability to your knife, whereas a half tang will break under too much pressure. Keep in mind, too, that fixed blades have one less point of breakage when compared to folding blades. The last thing you want is a snapped blade. You may hear or see this type also called a “slant-point.” Mainly seen with Bowie knives, fixed blade knives, and pocket knives, a clip point is an extremely popular design, that was made even more popular in the 80’s thanks to Crocodile Dundee. The hoodlum holds up a measly pocket knife to which Mick scoffs, “That’s not a knife!” And then brandishing his massive clip point states, “That’s a knife.” What makes the shape so iconic is the “clipped off” edge, which can either be straight or concave. The slim tip maximizes control for precision cutting as well as stabbing. In fact, many find that the lowered point lends itself to quicker stabbing, less drag upon insertion, and a faster withdrawal.

However, because of narrowness of the tip, it has been known to break off.

One of the most common blade types, you will find many of these knives are used for hunting. Drop point is also the shape used for tactical and survival knives, as well as large pocket-knives. The shape is defined by the unsharpened back edge that gently slopes downward from the handle to the lowered point. The main advantages of the drop point is the amount of control granted by the shape, which aids hunters when skinning animals and not nicking organs while maintaining a large slicing area. The drop point is also easy to sheathe, and the blade’s shape makes it resilient.

The only downside of the drop point is that the tip is not suited for piercing, especially when compared to clip or spear point knives. In that light, the drop point is the perfect hunting knife. You may also see the design incorporated into Swiss Army knives as well. A multi-function blade that handles any survival situation.

The shape of the blade is symmetrical, just like an average-sized spear; and so the point of the blade lines up perfectly with the center. You will often hear spear points compared to needle points (daggers), but there is a defining difference—the spear point is stronger and has a smaller belly for slicing. Though single-edged spear point knives can be found, the typical design is double edged with a center spine. In terms of penetration, spear points are the best, which is why these blades are often used as throwing knives. Compared to drop and clip points, the spear point has an even smaller belly, meaning it is not best for cutting and slicing. Still, this is an extremely functional blade. Enthusiasts will love the balance spear points strike with piercing and slicing, as well as strength.

A trailing point has a back edge that curves upward to end above the spine. In other words, the point is higher than the rest of the blade. The result is a lightweight knife with a large curve on the edge, allowing for a bigger cutting surface. The trailing point is the optimal knife for slicing and slashing. Many people use these blades for skinning and filleting knives, because they are capable to do delicate work.

Due to the design of the trailing point knife, there are a couple disadvantages. Due to the blade being designed for intricate work, it can easily bend and break if used on a denser material. They are also slightly harder to sheathe due to the shape. Yet for hunters and fishers, these blades are ideal. Essentially a modified trailing point skinner, the gut hook has the defining elements of both with the added utility of a semi-circle ground into the trailing point, on the back of the spine. This hook in the spine is used to pull at hide and skin in an unzipping motion. When game is cut using the gut hook, fur and flesh can be stripped away without digging into the muscle, which could negatively affect the quality of the meat. Although it is a highly specialized knife, it does the job of field dressing game perfectly.

These are often fixed blade or folding blade knives primarily used for skinning game. The ideal skinner should match the type of animal you are hunting. For example, if you are hunting whitetail deer, a skinner with a drop or clip point will help you remove the deer’s skin the best, since the hide is loosely attached with only a thin membrane. But if you want to hunt boars, for example, there is a lot of subcutaneous fat that needs greater attention, calling for a trailing point skinner. Next, for small game, you choose a skinner that is around 3 inches in length. Bigger animals, like deer, need 5 inches. Elk and moose would need an 8 inch blade. All that aside, it is the grind on the blade that makes it special. Opt for a hollow grind, drop point for increased sharpness. The sole purpose of the needle point (also known as the dagger) is to pierce and stab. Daggers are composed of two symmetrical blades that sharply taper to a thin point. These edges allow for the needle point to sink into flesh deeply. That is why the needle point blade is a favorite for close combat self-defense. Daggers are frequently used into the military too, because the blade can be downsized to a boot blade, making it highly concealable.

Yet, the geometry of the blade does give it some weaknesses. First, there is no belly on a dagger, just the edges that get thicker nearing the handle. This makes a dagger useless for slicing. Second, the tip is usually weak and thin, so it can break against hard targets. Also known as the chisel-point blade. Though the style is derived from Japanese samurai sword, the modern tanto used in America is a version of tactical knives from the 80s. Tanto blades are weapons of choice for law-enforcement groups due to the strength and versatility of the blades when cutting through various objects. What the tanto excels at, however, is piercing through tough materials. The blade as a high point, flat grind, and a lot of metal near the tip, allowing the tanto to absorb repeated impacts against hard surfaces and materials.

Because the tanto lacks a belly, it is not a utility knife. The point is also hard to control. It will, however, endure when the situation arises for piercing dense materials again and again.

When looking at a straight edge sheepsfoot blade, you may be reminded of Santoku chef knives. You are not wrong. The cutting edge and spine run parallel to each other. Usually the blade is either flat or only slightly curved. Since the unsharpened flat spine was designed for a finger to rest along it, the user gains excellent control over the knife. When looking to precision cutting, carving and slicing, the sheepsfoot blade is the best match.

The absence of a defined point is both a pro and a con. While you will not stab yourself unexpectedly, if you have a task that requires a defined point, you will be out of luck. Regardless, the sheepsfoot is a blade of choice for those learning sharpening skills, and who desire refined cutting and carving over stabbing. The most EDC (everyday carry) normal blade on the list, because you can find it in the chopping block in your kitchen! Also known as the straight back blade, the key feature is the unsharpened back, which allows the wielder to use their finger(s) to concentrate force. The straight back also enhanced weight and strength for its size. At the tip, the curve is smaller than other blade designs, but this makes the straight back blade great for cutting. Plus, it can pick, slice, and chop. The straight back is also the best single-edged blade in the list for thrusting, as the edge runs along the entire button edge, so it operates similar to a drop point or sheepsfoot knife. When you need the jack-of-all-trades knife, you choose the straight back.

When it comes to choosing the correct survival knife for your needs, more than goes into it than wanting something that stabs. Wielding a proper knife can make a difference between life and death in some situations, especially if you find yourself sawing rope with a dagger—which you hopefully know by now would be fruitless.

You may find yourself also waffling between material types and grinds. Stainless steel is less corrosive than carbon steel, but is not as tough as the later. Grinds essentially remove metal from the blade, so if you are looking for strength, not luster, opt for a knife with as minimal grind as possible. A hollow saber grind is recommended for all around functionality.

Now that you know the Top 10 knife blade designs, what they are used for, and the key weaknesses, you should be able to make an educated purchase. Knives are one of the essential bushcraft tools for survivalists, but they can be so much more. From prepping food to protecting you from dangers, knives can cover many of the survival bases. Choose wisely!