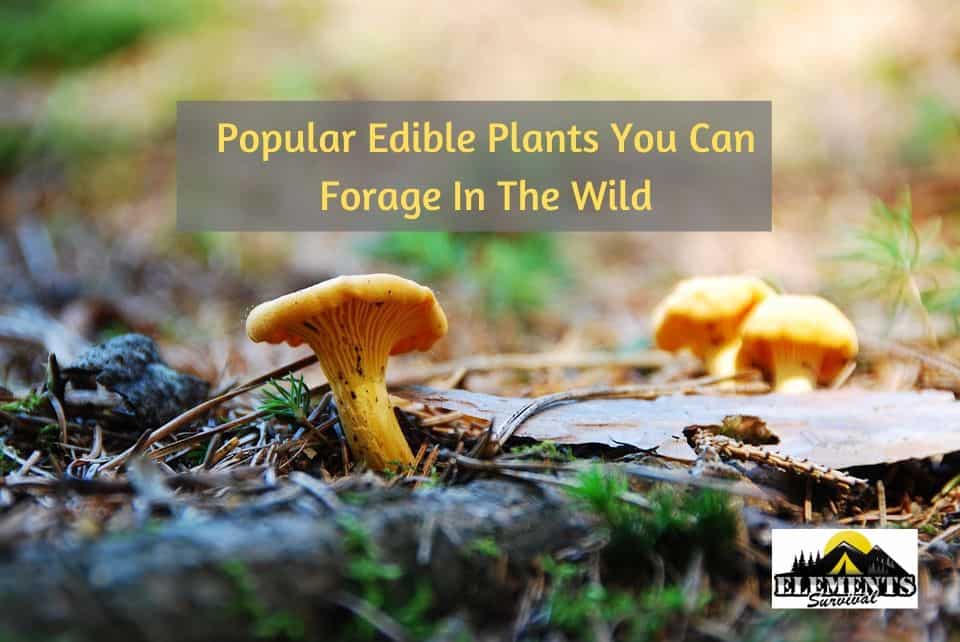 Popular Edible Plants You Can Forage In The Wild

The earliest human beings were hunter-gatherers and obtained food by foraging — hunting wild animals and collecting wild plants. These people lived nomadic lifestyles and moved from place to place looking for food.

Through centuries of practice, they learned to recognize which types of plants, berries, and fungus were edible, which were poisonous, and which only grew during certain seasons.

These days, things are much simpler. Most of our food is grown is huge farms away from cities. All you need to do is to take a trip to the nearest Wal-Mart if you want to gather food.

We don’t have to tend to the plants we eventually eat or see them growing in front of our eyes. We lack the appreciation and personal connections to our food that our ancestors had. However, it doesn’t always have to be this way.

Even in today’s modern times, it is possible to reestablish our severed connection to nature. It is a good idea to go out in the woods from time to time and pick wild plants straight off the ground that are highly nutritious and organic.

However, as we do not have the intrinsic knowledge of our ancestors that could differentiate between edible and non-edible plants, simply wandering unawares into a field and chomping on any interesting looking plant could be a recipe for disaster.

It can take years to learn to identify the plants that can be eaten, and more importantly, those that shouldn’t be eaten.

If you are a beginner, the best advice you can follow is to never eat anything that you cannot definitely identify. If you don’t know what it is, don’t eat it. This part can be very tricky since many types of flora look quite similar, but one may be edible while the other is not. Some greens, berries, and fungus may look like they are the best plants to eat but they can leave you with a bad stomachache — and can even be toxic, in some cases.

Some plants contain cyanide, a deadly poison that can kill instantly even if taken in minute quantities. If a plant smells like bitter almonds, don’t ever eat it, as it contains cyanide.

Before venturing out into a forest on your own, you should take a crash course for survival skills with local experts who know about the area. When venturing into new territory with unfamiliar plants, find out what the indigenous people eat as they are your best guide on which plants are edible.

Another suggestion is to eat a small part of a plant and wait for an adverse reaction, although this is not generally advisable as some plants can be deadly. If you feel any adverse reaction, induce vomiting immediately and drink plenty of water.

Beware of plants that grow alongside roads as they may be contaminated with harmful chemicals.

Having said that, eating edible wild food is very good for you and there are dozens of wild varieties that people with beginner survival skills can identify and gather. To help you get started, we have selected a few common edible plants that are known for their nutrition, medicinal properties and abundance.

Wild garlic has a milder taste than the cultivated variety. It can be identified because of its distinctive garlicky smell and is found spread out like green carpets near bluebells in woodlands. Wild garlic can also treat high blood pressure and reduce cholesterol levels.

Seaweed, one of the favorite ingredients in Japanese cuisine, is chock-full of vitamins and minerals. You can collect seaweed from any coastlines with exposed rocks. The best time for seaweed foraging is done when the tide is low, which exposes the wide range of varieties. Seaweed can reduce cholesterol levels, manage skin conditions and help improve blood circulation and thyroid levels.

People love to blow on dandelion flowers, and they have quite a reputation as weeds, but did you know these little puffballs are edible too? Dandelions are freely available throughout the country and can be eaten from top to bottom. The leaves, flowers, and roots can all be eaten raw but the leaves taste the best when the plant is young.

Dandelion leaves are rich with vitamins A, C, and K. Leaves and root taste better when boiled. The roots can also be dried, roasted and crushed to make coffee which has a mild chocolaty flavor. The flowers can be fried or made into juice.

Although the stinging nettle is quite prickly and can cause itching, this plant can be used for making versatile foods, like tea, beer, soup, and haggis. Once the leaves have been boiled down, the stinging hair falls off. Nettles are rich in iron vitamins and minerals; in fact, they contain more vitamin C than oranges. When choosing leaves, make sure they are young as mature leaves can lead to kidney damage.

Wild asparagus is found across North America and can be found where the soil isn’t too moist. The wild variety is thinner than its cultivated counterpart. Foragers should look for old stalks three feet high. You can find newer shoots near these stalks that are good to eat.

All species of clover are edible but the most common species foragers will find are the white clover and red clover. Some people can experience indigestion from raw clover but it can be made into juice or its flowers and seed pods can be crushed into flour. You can also make tea from clover.

Wild onions grow along damp forest floors. All of the parts of wild onions can be eaten raw or cooked from top to bottom. Beginner foragers can recognize wild onion by its characteristic onion-y smell; however, if a plant looks like an onion, but doesn’t smell like one, avoid eating it as it could be poisonous.

It’s not just pandas that can eat bamboo. Humans can eat them too. Bamboo belongs to a subfamily of grass and contains very high levels of fiber, potassium and protein. The best shoots to forage are young, tender and less than a foot tall.

Bamboo cannot be eaten raw. The outer leaves need to be peeled off, the shoots are shaved and sliced and then boiled to get rid of their bitterness. It can then be eaten.

Japanese knotweed is native to Asia but now grows rampantly in Northeast and Midwest America. It is also sometimes known as Japanese bamboo as it has light, hollow stalks that resemble bamboo. The best time to eat the plant is when the shoots are young; at this time, they have a lemony flavor.

Japanese knotweed is a wonderful source of vitamin A and C, iodine and the natural phenol, resveratrol. It is also known for its heart and anti-aging benefits.

Lamb’s quarters is a tall weed with white coatings on its leaves. The leaves look like teardrops and they grow in clusters with flowers grouped tightly at the top. It is also known as wild spinach and has an earthy flavor, which some people claim tastes like chard. Lamb’s quarters are rich in protein, calcium and vitamin A, C, and K.

The leaves can be eaten raw or cooked but in moderation due to high levels of oxalic acid.

Wild leeks are a species of onion with a small bulb and wide, broad, and smooth green leaves. They can be identified by the purple or burgundy tints on their lower stems near the bulb and by their smell, which is similar to cultivated onions.

Both the bulb and leaves are edible, but they should be consumed in moderation.

The milk thistle can be identified by its prickly light green leaves with white veins and red to purple flowers. The leaves can be eaten after the spines have been removed. Its stalk can also be boiled. Its flowers, stems, and leaves can all be eaten raw as well.

Although the garlic mustard has a bad reputation in North America — it is blamed for wiping out and replacing native plants— it is a superfood for foragers. Fully mature leaves are triangular or heart-shaped with scalloped edges. When crushed, they exude a faint garlicky smell.

The flower and flower stalk can be eaten and has a spicy horseradish taste. However, the most delicious part of the plant is the young stem which tastes like a cross between a garlic scape and sugar snap peas.

Wood sorrel and oxalis is characterized by clusters of three heart-shaped leaves that bear a strong resemblance to clover leaves. The plant comprises of yellow flowers with five petals and grows in moist areas of the United States and Canada.

It is a common variety of the forest undergrowth and all its parts can be safely eaten, including the flowers, stems, leaves, and seed pods. Wood sorrels have a sour tangy taste due to the presence of oxalic acid, so chewing them can be very refreshing. 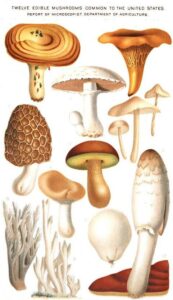 They may be our favorite pizza topping, but when you are in the wild, you have to exercise a bit more care on how you eat mushrooms.

Mushrooms are the most popular type of fungus but they can be a predicament for foragers as some varieties can be quite toxic. If you mistake a wild poisonous mushroom for an edible one, it could very well be the last thing you ever eat.

So when you go foraging for mushrooms, you need to be positively certain that you know what you are harvesting. Even then, it is best to only test a small portion first and wait a day to make sure you don’t have any allergic reaction to the fungus.

Luckily, some of the most mouthwatering mushrooms can be easily identified. Some popular varieties are: 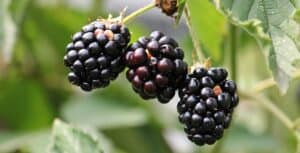 Berries are one of the easiest and most delicious types of plants to forage in the wild. They grow in abundance in many areas and there are innumerable varieties. They are also chock-full of vitamin C and fiber and hence are the most desirable kind of edibles.

Almost all dark-colored berries are safe to eat in the wild. However, white, yellow and unfamiliar red berries are so poisonous they can kill a person. Keep away from them unless you are sure the variety is edible.

Although grapes are not categorized as berries, all of them are generally safe to eat.

Some common berries include:

Nuts are a great source of protein for foragers. However, take care not to overharvest from a certain place as animals and birds gather nuts for food as well. Some popular nuts that can be easily found while foraging are:

Foraging is an exciting activity and beginners can easily get carried away and pick and taste every variety of plant they see. However, it is important to remember that there are about 350,000 species of plants in the world and only about 80,000 of those are edible. Take a look at some common plants that you need to steer clear of when you are foraging:

Rules for Foraging For Edible Plants

It should be clear that foraging can be very risky if you don’t know what you are doing. Here are a few rules for foraging:

Foraging is not easy. It takes a lot of time, energy, effort and patience to learn and understand which types of plants you can safely eat and which types you should steer clear of. You would require an experienced and professional forager to teach you the rules of the game and legal access to places to forage. Because of this, a lot of people give up on the idea of foraging.

However, for others, the thrill of eating the plants that you have found, identified, picked, and prepared yourself makes all the effort worth their while!